SearchScene is a charitable search engine. Like Google, we make money from search ads, but we donate 95% of our profits to charity, with a focus on supporting charities that help fight climate change and alleviate the suffering it causes. We also respect your privacy - all your searches are encrypted, we don't store your searches and we don't sell your data to advertisers.

Our search results are mainly powered by Bing and are enhanced with data from other sources, such as Wikipedia, IMDb, Spotify, Goodreads, etc. Our aim is to provide a first-class search experience whilst making the world a better place by donating most of our profits to charity. Read more here about how SearchScene works.

Install SearchScene on your desktop browser, phone or tablet to help save the planet with every search you make! 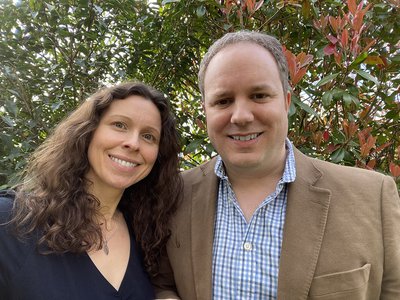 Prior to becoming an internet entrepreneur, Neil was employed in the space industry, where he worked on the computational simulator for Cryosat, a polar-orbiting environmental satellite, and provided simulator support at ESA's European Space Operations Centre in Darmstadt, Germany. Neil gained his PhD in Aerospace Engineering from the University of Southampton in 2004 and gained his MEng in Aeronautics & Astronautics from Southampton University in 1999. Neil grew up in Llanelli in Wales, and now lives in Devon in England.

Prior to joining Neil’s internet marketing company, Ciara worked as a Science Communication Consultant for Harvard University (2008-2009) and for MIT (2007-2008). She gained her PhD in Science Studies in 2006 from the University of Bath, having earned an MSc in Science, Culture and Communication from the University of Bath in 2002. Ciara graduated with a BSc in Experimental Physics from the National University of Ireland, Galway (NUIG) in 2001. Ciara grew up on Inishmore, the largest of the three Aran Islands, off the west coast of Ireland, and now lives in Devon in England.

Neil and Ciara became increasingly concerned about the climate emergency after their daughter was born. They already supported several environmental and humanitarian charities but wondered if they could use their expertise to make a much bigger impact. They eventually decided to create a charitable search engine that protects the planet and your privacy while you search the web.

After many years of hard work by a small but amazing team of people, SearchScene has finally become a stunning reality!

SearchScene is powered by Microsoft Bing’s search engine but it has numerous cool enhancements and donates a big-hearted 95% of its profits to major international charities: Eden Reforestation Project, Oxfam, WaterAid, WWF, UNICEF, and UNHCR.

If millions of people switched to SearchScene, the funds raised could make a huge impact by supporting the work of some amazing international charities that are fighting climate change and the suffering it causes.

Switching your search engine to SearchScene is one small step towards saving the planet and achieving some kind of climate justice.

With so much doom and gloom surrounding the future, it is important to retain a sense of hope in the power that we all have, individually and as a collective, to create a brighter future for all life on Earth.

If you are enjoying using SearchScene and are looking for another antidote to the doom and gloom, why not check out Ciara’s original environmental poems on the SearchScene blog, and share them with your family and friends!

You can get in touch via our Contact Us page, or via our London address here...

Send me a magic link

No need for a password! Just enter your email address and we'll send you a magic link to sign-in on this device.

We will encrypt your email before storing it on our secure servers. This method uses secure, password-free authentication.

A magic link has been sent to your email address.

Click the link and you will be securely signed into SearchScene.

Signing you in via Google, please wait...

Signing you in via Apple, please wait...